Best Cities to Visit in Brazil

Brazil is a country of magnificent carnivals, beautiful beaches, but this South American paradise has a lot more to offer than tourist attractions.

A UNESCO World Heritage town and a marvelous example of metropolitan development.

Brazil’s futuristic capital is a true treasure of architectural surprises, with lots of green open areas and big parks.

If you’re going to the Amazon, you’ll probably pass through Manaus, and this city in the rainforest is deserving a stop.

The city’s most popular building is its colorful opera house, Teatro Amazonas.

Also be sure to take a boat out to the Meeting of Waters, where the black waters of the Rio Negro run alongside the pale Amazon for several kilometers without ever mixing.

Located in the north of Brazil, nature lovers will find the city very beautiful thanks to its lush vegetation and rich wildlife.

Fortaleza has long sandy beaches and excellent weather which makes it an increasingly attractive destination for tourists.

Famous for its marvelous sand dunes and local forro music, this peaceful northeastern Brazilian city offers gorgeous beaches and pretty turquoise-blue waters, nightlife, and even a sand-buggy adventure journeys. It’s a safe, sunny city and, most importantly, the getaway to the incredible Rio Grande do Norte, the region with the cleanest air in the world, after Antarctica (according to NASA). 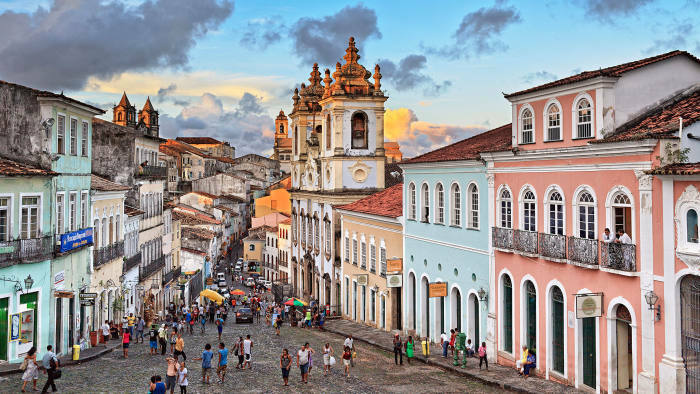 Salvador is a wonderful example of outstanding colonial architecture, delicious Bahian food, and colorful Afro-Brazilian culture. It is one of the prettiest, liveliest, and most exciting cities in Brazil, and a wonderful destination to combine music, beaches, and culture into a one-of-a-kind experience.

Cuiaba is the home of the country's wildest and most sensational landscapes. It lies at the crossroads of three of the nations most astonishing biospheres: Pantanal – the planet’s greatest tropical wetland, Cerrado de Chapada dos Guimarães with its panoramic scenery and river basins, and the Amazon.

Although Cuiaba it’s not only about wilderness spotting, riverboat journeys, and adventurous tours, it’s a place with a rich culture, indigenous cuisine, and fantastic history.

Porto Alegre is one of the country’s best cities for culture travels.

Historic neighborhoods such as Cidade Baixa come alive after dark, embracing all who wish to experience the good vibes.

Porto Alegre is no doubt Brazil’s most European town, and the Portuguese influence here is alive, especially in the local cuisine.

See other briefs for Brazil

Where to kitesurf in Brazil? - Brazil

How to get a CPF in Brazil - Brazil

How to get to Iguazu waterfalls - Brazil

Essential apps you must have in Brazil - Brazil

How to get to Ouro Preto in Brazil, Cheapest way to get there - Brazil

What you need to know about Ilha Grande - Brazil