With a pleasant climate, Mediterranean sea beaches, and cheap flights, Tunisia has become the major destination. However, Tunisia has plenty more to offer for the more adventurous traveler too.

Apart from lazy beach resorts visit the Roman city of Dougga or the lovely mountain town of Le Kef. Other less touristy destinations include Sfax and Kairouan.

The history of Arab Empires has also bestowed the country with some of the region's most beautiful examples of Islamic architecture.

Once you gazed at Kairouan's minarets or imagined yourself as a gladiator at El Djem, it's time to travel into the Sahara to sample the raw, empty charm of the desert.

If you’ve always wanted to cross the Sahara by camel, Tunisia is the place for you.

Dougga or Thugga has World Heritage Site status from the UNESCO.

It sits on a steep hill, rested above fertile hills of forests in central Tunisia. Despite its status as a preserved Roman city, the settlement is actually quite a bit older than that – the discovery of dolmens (Bronze Age burial structures) within the city limits indicates a human presence since at least 2000 BCE. Though most of what remains of the city are from the Roman era, there are several important Numidian buildings including the Punic-Libyan Mausoleum.

One of Tunisia's most recorded buildings and a "film star", the Ribat in Monastir is a massive walled and exceptionally well-preserved fort. Looming over the harbor, the Ribat was originally part of a series of forts that guarded the coastline, but today is one of the few still standing. Its defensive purposes may have long since faded, but this golden-stoned relic is now one of Tunisia's most well-known landmarks

This is Tunisia's top beach resort. Fantastic place dotted with pristine white houses set alongside a clear blue sea. It's a no stress kind of place that sums up the pleasures of Tunisia in one attractive case.

Sidi Bouhlel is a valley near the town of Tozeur in Tunisia that would not even be remembered if it were not for all of the Star Wars that were shot in here.

The canyon takes its name from a nearby shrine although it is more commonly known as the “Star Wars Canyon.”

The majestic structure is the oldest Muslim place of worship in Africa, founded in the year 670 — shows the combined influences of pre-Islamic, Roman, and Byzantine architecture.

The Great Mosque, also known as the Uqba Mosque, is at the heart of the Kairouan cities heritage. 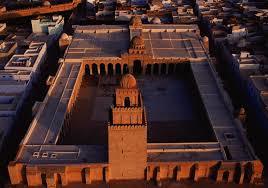 Tunisia's huge Sahara covers much of the country's interior, but the most fascinating edge of the desert is the area of sand dunes known as the Grand Erg Oriental.

These gorgeous dunes are a surreal and impressive landscape of huge waves, shaped by the ever-shifting desert sands. You can ride dune buggies and camel treks, but nothing beats the simple pleasure of sitting atop one of these sand mammoths and watching the sunset over the Sahara. 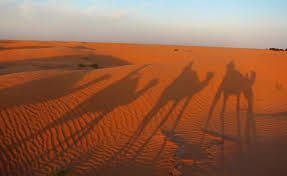 An ancient burial ground that is believed to have been used for ritual sacrifice.

Carthage in Tunisia, as well as others in the region, was discovered in the late 20th century. It, along with the others, contained burial urns stuffed with the cremated ashes and bone fragments of young children. Over 20,000 urns buried under stelae were found at the Tophet in Carthage, which is one of the largest cemeteries from the Phoenician period.

If you're looking for the picturesque beach, then the island of Djerba is for you.

The island town of Houmt Souk is the main point of interest off the beach, with an old town district that is mixed of white houses. Houmt Souk's shopping is an attraction in itself, with plenty of handicraft merchants on the beach.

Sandy shoreline here is the island's most famous highlight.

French and Arabic are the official languages of Tunisia. English is barely spoken and only the younger generation has a better cinch of it.

I would advise picking up a few French phrases or at least downloading Google Translate!

I don’t think I have seen a cheaper country with taxi service.

For longer distances, the louage is the way to go. Those are intercity vans that fill up when ready. Every city has a louage station, and the one in Tunis city is only a couple minute walk from the main train station.

To get a louage, you just head to the station and purchase a ticket from the ticket booths. The drivers then ask where you’re going and shuffle you into the right car.

The whole process is quite fast and organized.

The trains in Tunisia are old, but they’re good but usually uncrowded. The advantage of the train is that it is usually much more comfortable than a crowded louage.

The only problem is that trains don’t stop in every town and some only have a couple of runs a day.

See other briefs for Tunisia

How to get a SIM card in Tunisia - Tunisia

How to get to Carthage from Tunis - Tunisia

How to get to Sidi Bou Said - Tunisia